1. Loquat leaves have long been regarded as good for health and have been popular as a simple home remedy

Loquat leaf hyperthermia therapy is a combination of loquat leaf therapy and heat treatment therapy, and the synergistic effect of both enhances the natural healing power (life force) of human beings and cures diseases.

At the beginning of the Showa era, Dr. Tetsuo Fukushima of Sapporo Railway Hospital said:

He mentioned that the loquat leaf treatment has immediate effect, reliability, and can deal with various symptoms.

2. The history of loquat leaf therapy 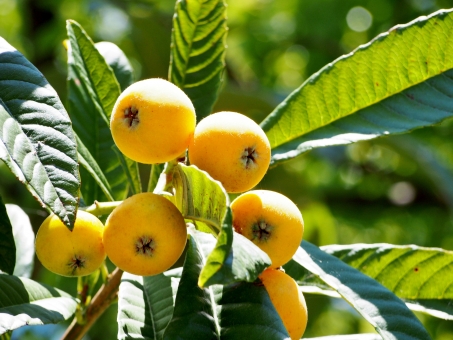 In one of the Indian Buddhist scriptures, the Nirvana Sutra (Mahāyāna Mahāparinirvāṇa Sūtra), the loquat tree was called the “King medicine tree”, the leaves were called “carefree fans” and the tree was said to have medical properties.  It was said that the King medicine tree, its branches, leaves, stems, and roots all had medical properties and that if someone who was sick breathed in the fragrance, held it in their hand or consumed it that it would cure their illness.

Introduced from China with Buddhism during the Nara period

3. Why is loquat heat treatment good for you?

In 1950, a biochemist in San Francisco named Dr. Ernest Krebs extracted and crystallized amygdalin from apricot seeds (apricot kernels), named it “Laetrile”, and used it to treat cancer.  This treatment was called “vitamin B17 therapy” or “Laetrile Therapy”.

Dr. Krebs pointed out that lack of amygdalin due to uneven diet leads to abnormal metabolic activity, which leads to decreased immunity and antibacterial activity and causes not only cancer but also lifestyle-related diseases such as heart disease and diabetes.

Processes where amygdalin is successful

When amygdalin enters the body, it is hydrolyzed by a special enzyme called beta-glucosidase, which is contained in large amounts around cancer cells, and hydrocyanic acid and benzaldehyde are released.  Cancer cells are destroyed by the synergistic toxicity of these two substances, but normal cells have a protective enzyme called rhodanese, which transforms both substances into harmless substances and is not affected.  Seen under a microscope, cancer cells die like insecticide-treated flies.

In addition, benzaldehyde formed by the decomposition of amygdalin is oxidized to benzoic acid, which is effective for antirheumatic, sterilization and analgesia (painkiller).  Among them, the analgesic effect is tremendous, and it is effective for relieving the pain of terminal cancer, neuralgia and sprain pain.

Dr. Fukushima wrote that many patients with intractable diseases were cured by treatment applied by Taikei Kono (principal priest of the Konchiin in Shizuoka, Japan), and the scientific mechanism by which “amygdalin contained in loquat leaves decomposed to produce a trace amount of hydrocyanic acid. It enters the body by absorption through the skin. Although hydrocyanic acid is a deadly poisonous substance, the production of a very small amount may have an enormous medicinal effect on the contrary.”

This paper, which focuses on the medicinal effects of amygdalin contained in loquat leaves, is thought to have helped establish the theory that “The Effect of Loquat Leaves = The Amygdalin Effect”.

After that (1950s), the extract of amygdalin “Laetril” was used for cancer treatment in the United States, and the theory of “The Effect of Loquat Leaves = The Amygdalin Effect” became more and more widely accepted.

For this reason, most books on loquat leaf therapy explain that the effects of loquat leaves are due to the medicinal properties of amygdalin.

Dr. Yasuda used a domesticated rabbit weighing around 600g, put 75g of raw loquat leaves in a metal cylinder, heated it and sprayed it on the abdomen from about 9cm away.

As a result, the blood of domestic rabbits was purified to weak alkaline in just 5 minutes. After a further 30 days, the bone tissue became firmer, the internal organs became healthy, and it gained weight.

Additionally, there is a case where a patient with penile cancer who was treated only with loquat leaf therapy under Professor Yoshio of Osaka University School of Medicine.  After treating the spine, abdomen, and local area three times a day for one hour, the cancer cells were completely destroyed in 49 weeks, and healthy tissue was restored.

In summary the effects of loquat leaf are

Is amygdalin a poison?

In recent years, the question of the efficacy of amygdalin against cancer has come to the forefront.  Questions such as “The medical effects of amygdalin have been denied, so isn’t loquat leaf therapy ineffective?” and “Amygdalin is a cyanide compound. Is loquat therapy dangerous?” have been raised.

This is in reverse order, and it is a well-known fact that the treatment of loquat leaves has been widely known for a long time, and amygdalin is only one of the hypotheses that explain its effect. However, the effect of loquat therapy is not denied.

In addition, the idea that “amygdalin is a poison” has come to be seen frequently, but amygdalin itself is different from water-soluble inorganic compounds generally called cyanide( such as potassium cyanide and sodium cyanide) and used by itself does not show any toxicity.

An enzyme called beta-glucosidase is required to decompose amygdalin to release its parts, and this enzyme is not abundant in humans. It is not something that will cause immediate poisoning unless taken in large quantities at one time.

There is no need to worry about if it is dangerous if you continue to take it for a long time and, unlike arsenic and hydrocyanic acid, does not accumulate in the body and cause chronic poisoning.

In 2002, Professor Yutaka Nishioka of the Kochi Medical University group revealed that the extract from loquat seeds has a strong ability to improve liver function.

The effects discovered through animal experiments are unlike any experienced with pharmaceuticals, and in examining the mechanisms from various angles, it has become clear that loquat seed extract has a strong effect of suppressing active oxygen.

Professor Nishioka is continued his research at Kochi University School of Medicine.  In 2008, it was proven that loquat seed extract is useful for improving allergic symptoms.

According to Professor Nishioka’s research, loquat seeds contain many amino acids and many other compounds that are beneficial to the human body.  Also the “antioxidant effect” in particular is superior amongst  its various effects.

In recent years, it has become clear that a substance called active oxygen, which is excessively generated in the body, is greatly involved in the onset and progression of many lifestyle-related diseases and intractable diseases.  Active oxygen itself is indispensable for the living body, but if it increases too much, it causes various disorders.

Therefore, it is said that preventing active oxygen from becoming excessive will prevent the onset and progression of the disease.

Loquat seed contains many active ingredients, and by complementing each other, it exhibits ideal properties as an antioxidant.  Therefore, it works by suppressing active oxygen and shows a strong antioxidant effect.

In this way, the effects of loquat seeds as a whole have been confirmed by recent scientific research, and the mechanism has become clear from a new perspective.

The picture above is the loquat tree and fruit of my parents’ house (Miyazaki, Japan).